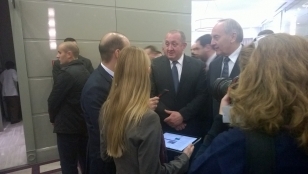 During the past week, while Latvian President Andris Berzins was on an official visit in Georgia (Tblisi and Batumi), DPA board member Sandis Kolomenskis and DPA Georgian subsidiary manager Sanita Meijere were also in attendance.

As part of the meeting of businessmen, the Georgian (Tbilisi) – Latvian Business Forum took place on November 26th. Our colleague Sanita Meijere participated with her presentation titled "DPA achievements in Latvia's ICT due to Georgian competence in IT security". Both DPA representatives were also at the reception in honor of the 96th anniversary of the proclamation of independence of the Republic of Latvia and the opening of Latvia's day in Georgia called "Taste Latvia", which was organized by Elita Gavele, Latvia's ambassador to Georgia.

Sandis Kolomenskis took part in the reception at the castle of the Georgian President, along with Georgian and Latvian Presidents and individual businessmen. In turn, the Presidents of Latvia and Georgia visited the DPA stand at the Georgian (Batumi) – Latvian Business Forum, where our colleagues introduced both presidents to our new portable biometric device. Batumi is located in the Autonomous Republic of Adjara, which is one of the largest customers of DPA's Georgian subsidiary. DPA representatives had the opportunity to meet with representatives from the Adjara government during the business forum.