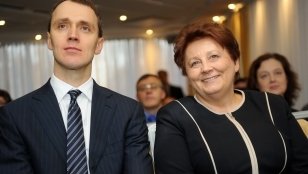 The "Latvia's presidency in the Council of the European Union – Latvia's opportunity for IT innovations" session regarding issues in the cyber security of Latvia, which was organized by DPA and EY (Ernst & Young), took place on Friday, November 28.

We shared in our experience in and opinions on issues regarding innovations in IT security and the unlimited number of opportunities that we have in this field.

The session on issues of cyber security happened in honor of the coming Latvian presidency of the Council of the European Union, which will be the most significant event for our country in the next year. 2015 will be the moment when Latvia's name is heard throughout the world more often than usual – a time when many high ranking officials and intelligent minds will be visiting us and assessing what we are able to contribute and how innovative we are. We must take advantage of Latvia's presidency of the Council of the European Union to highlight the national achievements and initiatives, which we are proud of.

The DPA and EY organized session was unveiled by the Latvia's Prime Minister Laimdota Straujuma. She emphasized Latvia's priorities in the context of the presidency of the Council of the European Union – Europe's competitiveness, including, attracting investments, Digital Europe, and Europe in the global world. The Prime Minister also explained that the digital priority will be divided into three directions – the digital agenda as the driving force of the European economy; digital security for organizations and individuals; digital skills. To promote important issues in the sector, L. Straujuma ended her speech with an invitation for all IT representatives to actively collaborate with the Ministry of Environmental Protection and Regional Development and the Ministry of Transport, which will represent issues of Digital priority during Latvia's presidency of the Council of the European Union.

DPA New Business Directions Development Director Aigars Jaundalders introduced the session's participants with possibilities for innovation in the digital war (IT security), emphasizing that each individual's identity must be protected, because that is the primary goal of hackers (usernames and passwords). Moreover, speed is one of the signs of asymmetry – an advantage of an attacker, no matter what his knowledge level is. The DPA representative emphasized that modern day resources for protecting IT security have become ineffective, they are no longer competitive. To improve the situation, the first and most effective resource is to forgo passwords as the only method of authorizing a user. Acto Enterprise Identity, the next generation of user verification developed by DPA, was demonstrated at the event.